Posted on October 6, 2019 | Comments Off on The Art Fair Circuit

The beautiful fountain at the center of St. James Court. It’s beauty is somewhat dimmed by all the lovely art booths. The line at the Bloody Mary booth quickly formed when the fair opened.

I attended the St. James Court Art Fair in Louisville this past Friday.  I’m not sure if I ever mentioned this before in my blog, but I did art fairs for about twenty-five years.  The memories came flooding back, some good and some not so pleasant. 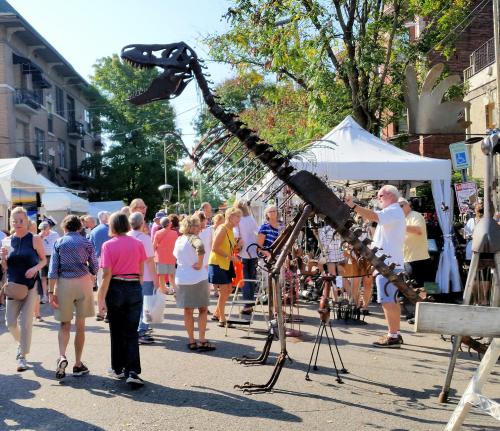 Traveling around the country to attend art fairs is like being part of a big family, something like being in a circus, I imagine. If you spend a few days next to someone, you quickly make friends.  Sometimes you start a conversation in May and end it in October.  Your friendships may carry on for years. 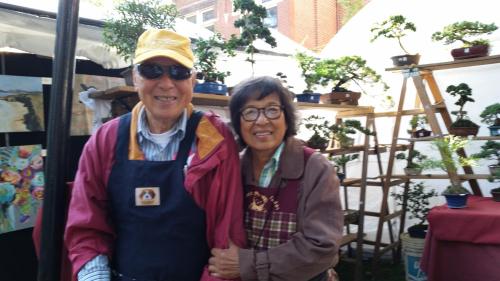 Mr.and Mrs. Huiying Lee in their bonsai booth at St. James. I always love to stop by. Not so successful with keeping a bonsai alive but it’s still a dream.

Brandon King, a young man from Jonesboro, Arkansas stands in front of his beautiful display. This is only his second year of exhibiting at art fairs.

Most of the time I would travel to the fairs alone but for some of the bigger ones I would take help, usually hiring a high school student or one of my boys when they got older.  I think I only did at most about twenty shows a year but pretty well traveled throughout the Midwest.  Some artists I know did the art fair circuit in the northern states in the summer and then went south to cover the southern states in the winter.  I knew several artists who lived and created totally in their campers.  Another couple I knew floated around in the Gulf of Mexico in the winter on their boat, stopping at ports to collect mail.  Of course, now all that is done on the internet and with e-mail, but this was quite a few years ago. 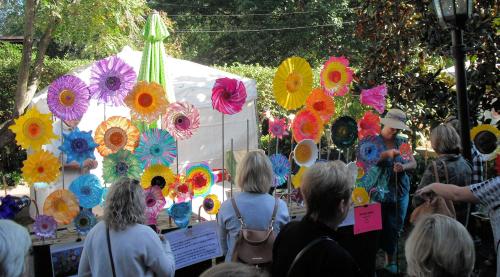 I love these colorful glass garden flowers I saw at St. James.

So this past Friday I decided to take a trip to Louisville to visit the fair at St. James Court, one which I had exhibited at for about twelve years.  The weather had finally broken and the day was cool and sunny.  I got there very early as I am aware of the difficulties of snagging a parking space as the crowds arrive.  The early bird, etc., etc.  As I made my way onto the fair site, the first thing is that I was met with the smell of cooking onions…at 9:30 in the morning.  But the aisles were uncrowded as the artists put the final touches on their booths.

Last year St. James as blistering hot.  But some years when I exhibited, it was so cold and rainy that we kept buying cups of hot cider just to keep our hands warm.  It’s all part of the job.

I only recognized a few artists that I knew in the past. I guess many of my contemporaries are retired now, too.  I made my way to some of my favorite booths.  I love the couple that sells bonsai.  Looked for the glass artist with the special paperweights but he wasn’t there this year.  Spent some time talking with a nice young man from Arkansas about his beautiful paintings.  So much to see.  After a couple of hours, the crowds were packing in and I was getting tired.  Time to leave while my feet could still move.

Over the years, I’ve had people approach me and say, “I would like to do this.”  They have NO idea, I would think.  The months of preparation, creating enough inventory, the application process, booth fees, traveling expenses, dealing with the weather, bugs, etc. Not to mention the physical toll of hauling your stuff all around.  Sheesh!

Me and my art fair family at Ann Arbor. I’m the one waving.

I have had many wonderful experiences over the years but a few stand out.  There was the singing garbage man in Ann Arbor.  And the time I had a water main leak IN my booth….at St. James, of course.  The time a big storm was coming and I had packed up my artwork and had just taken the weights off my tent when a wind tipped it up and over….while I was standing in the booth!  The time a couple consulted and bought my show piece (largest painting).  The little boy who would attend the fair every year just to talk to a real artist; I watched him grow up over the years.  The couple who invited a few of us artists to their home at the end of the day for a home-cooked meal. That was very welcomed.

So next time you’re at an art fair, take some time to talk with the artists. You might be surprised what they have to say.

This is what the street looks like at 6:30 in the morning on the day of set up at Ann Arbor. This is one of the top ten art fairs in the country, with three fairs going on simultaneously. Plus every merchant has a sidewalk sale and everyone with a front yard is selling something. That is the student union in the background.

Early morning, road is clear. Wait until this afternoon.

The Art Guild crew laying out the booth spaces before we can set up.

It’s mid-morning. The booths on the sidewalk side set up first.

Mid-afternoon, most of the booths in the interior are set up by now.