Posted on April 22, 2017 | Comments Off on More paintings Florida Keys

The Florida Keys are the kind of place which could supply years’ worth of painting inspiration.  Here are a few more paintings of my recent trip to the Keys, based on sketches and photos.  They just have a totally different feel from the other landscapes that I work with. 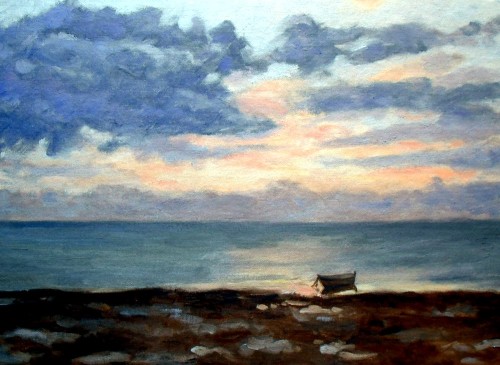 Isabelle’s Place, oil on canvas board 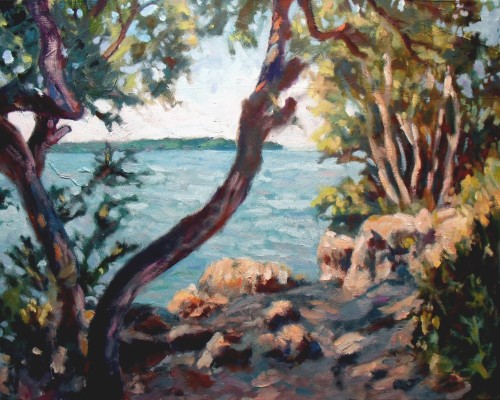 Among the mangroves, Florida Keys

I think that people who live close to nature are generally more attuned to the seasons.  Every little bulb that pokes its nose up, the buds on the trees and bushes, and even the wrens making their nest on my front porch.

Hostas and bluebells in early spring

Here are just a few of this spring’s observations on My 90 Acres.  Missed posting the daffodils and forsythias but that is what happens.  Time and nature keep moving on. 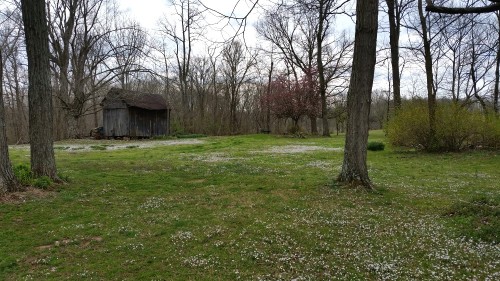 A yard full of spring beauties 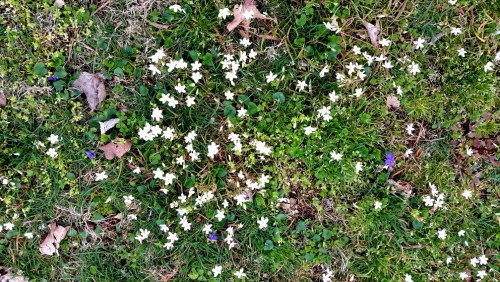 Close up of spring beauties and violets

Probably won’t be burning too much more wood in the wood stove.  It’s been a mild winter but we always feel like squirrels hoarding nuts when we have big piles of firewood.  It will keep until next winter. 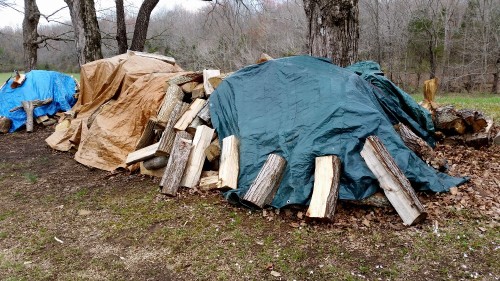 Comments Off on Yay! Spring is here!

One of the nicest things about living in the country is being able to grow our own food.  We like the fresh from garden to table taste as well as knowing what is (and isn’t) in our produce.  We’re not fanatics about it (at least I don’t think we are) as there are many things we’ve tried over the years but which just aren’t worth the trouble.  For instance, carrots and potatoes are cheaper to buy in the store or farmer’s market than grow ourselves.  Too labor intensive.

But one of the things we enjoy doing most is pushing the seasons.  We have a spring/fall garden area, separate from the main garden, with a cold frame and some area to plant cooler weather crops.  Here we grow kale, lettuce, asparagus, snow peas and onions.

What you see here are two kinds of lettuce and Siberian kale that we planted back in mid-February.  We should be eating this next week.  The cold frame is covered with screen, and in colder weather, a top with plastic, and sometime if we get a late snow or freeze, a blanket.  The lettuce and kale will keep coming until June.  Then we replant it in September to eat in November and early December.  No pesticides or sprays at all.

We’ve planted onions sporadically over the years but always had trouble keeping them.  We dried them on screens or put them in the shop refrigerator, but they still spoiled.  So last year I pointed out to my husband that since we mostly cook with them, why not just chop them all up and freeze them.  So that is what we did.  With the aid of the food processor, it didn’t take any time at all process them all.  It was so easy to just grab a few handfuls whenever we were making soups, stews, or other recipes which called for chopped onion.  This year we’re experimenting with several varieties but we really like the large sweet onions.

Starting seeds in greenhouse. The mousetraps are because the mice kept digging up the seeds!

The garlic has been another challenge.  We planted two kinds last fall.  One made it and one totally died.  My husband did the planting and didn’t mark which was which, pointing out the necessity of keeping good records.  We all have faulty memories and it’s often difficult to recall when and what we planted after the passage of several months.

Sure am looking forward to that lettuce, though!